The Dupont’s lark (Chersophilus duponti) is one of the most endangered and scarce birds in Spain and Europe. In Spain it is in the “endangered” category of the Red Book and is legally catalogued as “vulnerable” (Spanish Catalogue of Threatened Species, R.D. 139/2011). It has just been declared in danger of extinction.

At the European level, the Dupont’s lark is considered as a species to be subject to special conservation measures regarding its habitat, in order to ensure its survival and reproduction in its distribution area (Annex I of the Birds Directive 79/409/EEC). 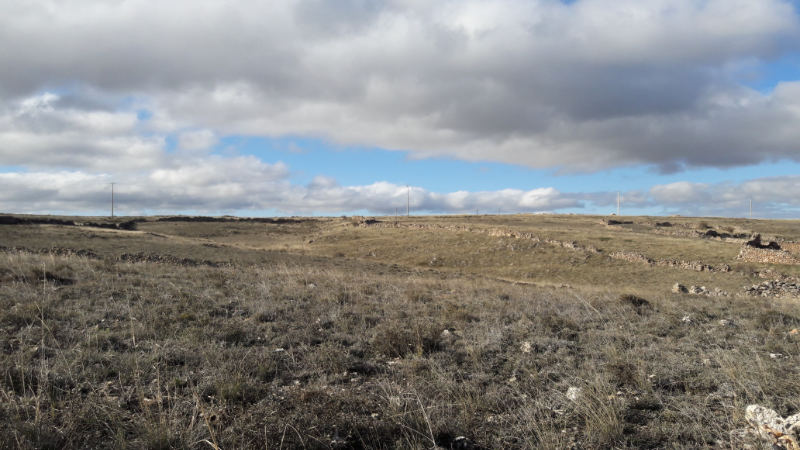 In 2014 it was added to the Ornis committee list, making it a priority species for funding through the LIFE program. Since then, there has been only one LIFE project related to the species and its habitat: the LIFE Ricotí LIFE15 NAT/ES/000802 implemented in the period 2016-2021.

The Spanish population is the only one present on the European continent. The latest and most reliable estimates of the population size indicate the existence of about 3400- 4500 males in Spain. Considering that the adult sex-ratio is biased towards males (females/males: 0.61), it has been estimated that the Spanish population consists of 2200-2800 pairs. This is an extremely low population size for a bird of small size, aggravated by the regressive trend that has been observed in much of its range.

The conservation of the Dupont’s lark is being compromised by several factors, the most important of which is the loss of quality habitat. Whether direct, by direct destruction of the scrub steppe, or indirect, by deterioration of the conditions that allow the presence of the species, habitat loss not only reduces the species’ range but also increases spatial fragmentation. Extinction and local range reduction and the isolation of populations are enhanced by the low dispersal capacity that seems to characterize the species.

Habitat is important because of the extremely selective behavior exhibited by the Dupont’s lark. The Dupont’s lark uses a very specific type of steppe environment, that of low scrubland in flat terrain. This type of environment has traditionally been the object of a shared use between agriculture and livestock. In fact, there is a close relationship between the Dupont’s lark and extensive sheep grazing, since it seems that this livestock use is at the origin and maintenance of the structure of its habitat. The high specificity of the Dupont’s lark and the selection of a type of environment subjected to intense human management are critical factors for its conservation. In this sense, the threats to the species are the disappearance of traditional livestock use, agricultural intensification, reforestation, mycorrhizal tree plantations and, recently, the establishment of wind farms.

On the other hand, the particular characteristics of the Dupont’s lark, a small passerine of elusive behavior and basic biology still poorly known, make it difficult to implement direct management measures to improve its conservation status. Therefore, in this project we propose to act indirectly, through its habitat, by restoring land currently unsuitable for the species and improving the quality of potentially suitable habitat. The apparently low dispersive capacity of the species requires not only increasing the area of optimal habitat, and thus increasing the carrying capacity of populations, but also facilitating connectivity between populations.

From the point of view of the local social perception, moreover, the Dupont’s lark is an unknown species or is even considered an obstacle to development. Most of the best Iberian populations of the species, such as those proposed for this project, are located in regions that are among the most depopulated in Europe (density < 3 inhabitants/km2) and that in recent decades are suffering a significant loss of economic activity.

You can learn more about what cookies we use or disable them in the settings.

This website uses cookies so that we can offer you the best possible user experience. Cookie information is stored in your browser and performs functions such as recognizing you when you return to our website or helping our team understand which sections of the website you find most interesting and useful.

If you disable this cookie we will not be able to save your preferences. This means that every time you visit this website you will have to activate or deactivate cookies again.